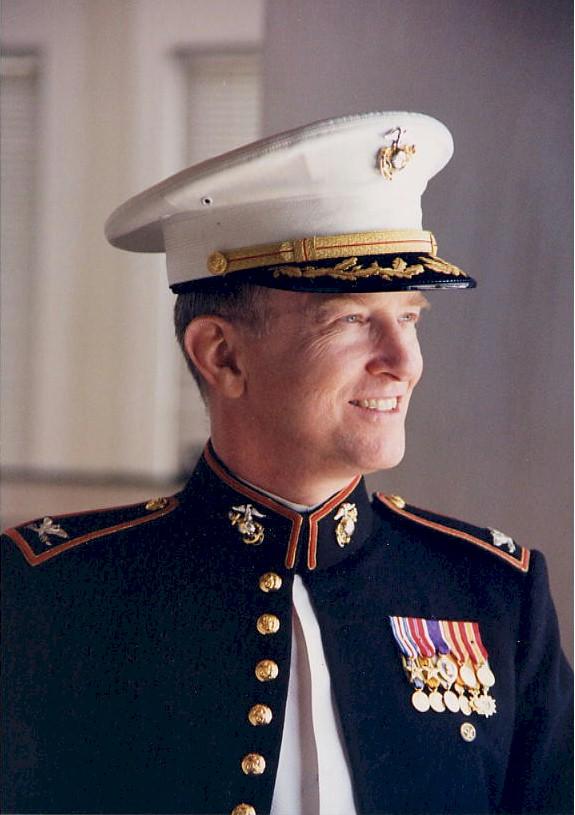 In 1964, Colonel Ray was commissioned in the U.S. Marine Corps, serving as a Platoon Leader and one of the first Marine officers ashore for the evacuation of civilians during the Dominican Republic Crisis in 1965.  Colonel Ray later served as an Infantry Battalion Advisor to the Vietnamese Marine Corps in the Republic of Vietnam during 1967 and 68, participating in combat operations throughout South Vietnam including major joint operations during the TET Offensive, Hue City, Coronado II and Paddington.  During his active military service, Colonel Ray was awarded many decorations, including two Silver Stars for gallantry, a Bronze Star with Combat “V”, the Purple Heart, the Vietnamese Cross of Gallantry and the Vietnamese Honor Medal.

Colonel Ray resigned his active commission in 1969 and joined the Marine Corps Reserve, where he held a variety of command and staff positions, including command of combat and combat service support units in Louisville and Ft. Knox, Kentucky.  In 1974, he was certified as a Staff Judge Advocate, and graduated with honors from the Naval Justice School in Newport, Rhode Island, and attended many senior level military schools, the NATO Defense College in England and the National Defense University.  He served as Deputy Director for Field Operations for the Division of History and Museums of the Marine Corps.  Colonel Ray retired from the Marine Corps Reserve on June 30, 1994, and he is currently working on a history of the Vietnam War.

In 1984, Colonel Ray was appointed the first Deputy Assistant Secretary of Defense (Guard/Reserve) in Washington, D.C., which Pentagon appointment included responsibility for staffing and organizing a national management structure for exercising policy guidance and overall supervision of the 1,800,000 members of this nation’s National Guard & Reserve Forces.  In 1985, he received the National Eagle Award from the National Guard Association for exemplary public service while in the Pentagon.

In 1990, President Bush appointed Colonel Ray to the American Battle Monuments Commission, which is responsible for commemorating the services of American Armed Forces through the erection of memorials and maintaining cemeteries.  In 1992, Colonel Ray was appointed by the President to the Commission on the Assignment of Women in the Armed Forces.  Colonel Ray founded and served as the Chairman of the Kentucky Vietnam Veterans Memorial Fund, which privately raised more than one million dollars to build and dedicate a unique granite sundial as a Memorial to Vietnam veterans in Frankfort, Kentucky.

Colonel Ray was the lead counsel in the three cases brought in 2000 by the ACLU against Kentucky’s Pulaski and McCreary County Judges and Harlan County Schools seeking to suppress or censor the public posting of official and historical American political documents including: an excerpt from the Declaration of Independence; the Preamble to the Kentucky Constitution; America’s national motto “In God We Trust;” a copy of the February 2, 1983, Congressional Record, which contains the text of the Ten Commandments; a proclamation by President Abraham Lincoln; a proclamation by President Ronald Reagan; and the Mayflower Compact.

In 2009 Colonel Ray was asked to represent 35 Kentucky State Senators and 96 State Representatives along with The Family Foundation of Kentucky and to oppose The American Civil Liberties Union of Kentucky in two cases brought against Kentucky’s Homeland Security Law by the American Atheists, Inc. and the ACLU seeking to remove the name of “Almighty God” from Kentucky’s Homeland Security Law.  The fight to secure the Lord’s name in Kentucky’s foundational law continues today.

Colonel Ray was selected for Who’s Who in America and Who’s Who in America Law.  He has appeared on multiple national television news broadcasts including: ABC World News Tonight, Larry King Live, Hannity and Combs, Fox and Friends, The Today Show, Fox News, Crossfire, and a number of national radio broadcasts.  Today Colonel Ray writes and speaks on public and Constitutional issues of national interest such as America’s Christian Heritage, “Exemplary Conduct” in the U.S. Armed Forces, the true relationship between Christianity and Politics, the Second Amendment, history of the Vietnam War and MIA/POWs, and a variety of defense and current policy subjects.