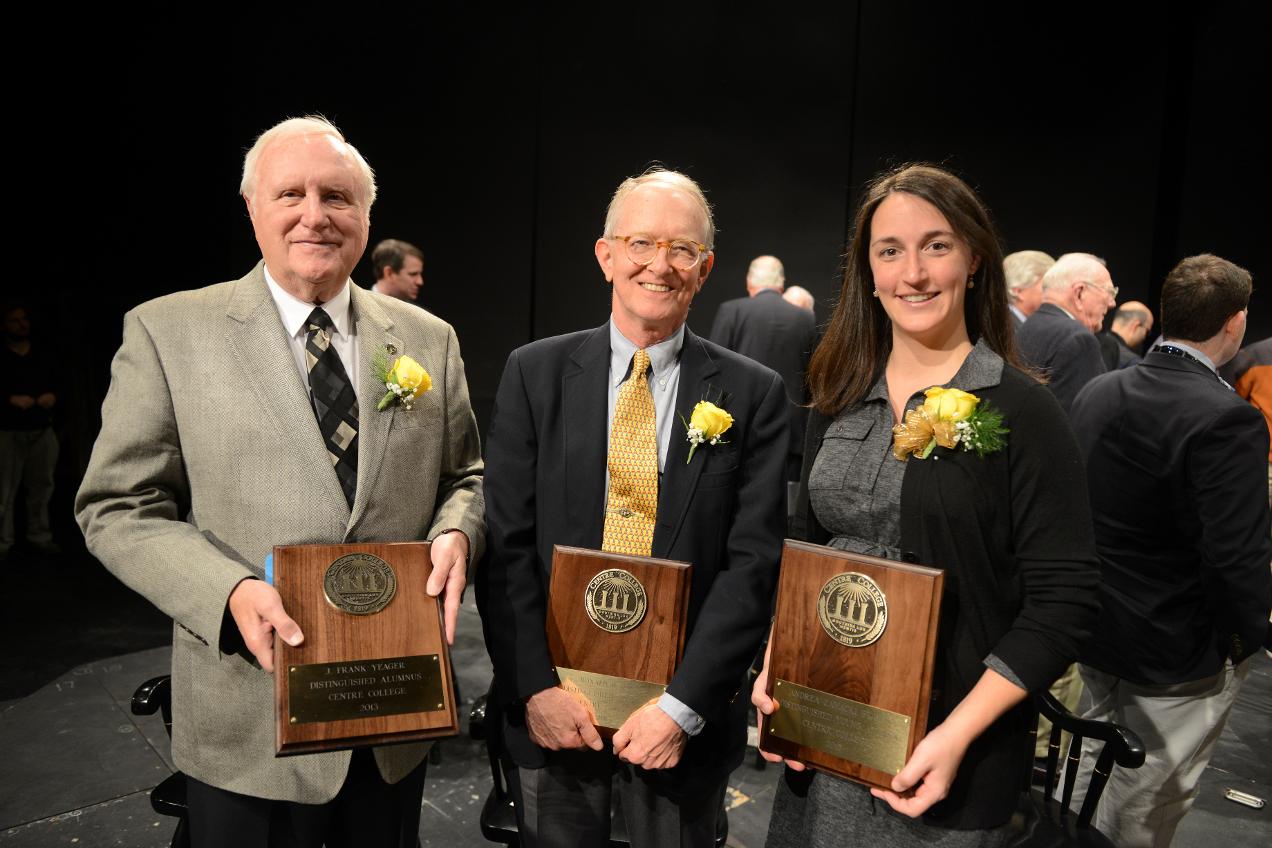 On Saturday morning, the Donald D. Buchanan ’83 Memorial Outdoor Classroom was formally dedicated, officially welcoming it to the College campus.

Homecoming was a resounding success this year, with over 1,000 alumni invited to return to campus. While the weekend was overflowing with festivities for alumni of all ages, Saturday morning ushered in three events that honored specific alumni for their unique contributions not only to Centre College but also the communities and lives they have touched.

On Saturday morning, the Donald D. Buchanan ’83 Memorial Outdoor Classroom was formally dedicated, officially welcoming it to the College campus.

President John Roush spoke warm words of welcome and thanks to those who gathered, explaining how important the new teaching space is for a place like Centre.

“I suspect most of our alumni have fond memories of outdoor classes—or of trying unsuccessfully to persuade professors to move outside,” he said. “But many professors didn’t consider outdoor classes an option because they lacked the most basic of teaching aids—a blackboard. More recently, advances in classroom technology have made it even harder for teachers to abandon their computers and projectors for the shade of an oak tree. Well, now they have a new option. As our first real outdoor classroom, complete with a whiteboard, wi-fi accessibility, and electrical service, we have provided a classroom that can meet the technical demands of most of our classes.”

President Roush also thanked the friends and family of Donald Buchanan ’83 for their unflagging energy and support in establishing not only a scholarship fund for students but also the multifunctional and beautiful classroom space those same students can now enjoy. 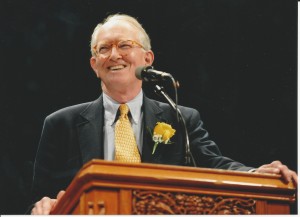 Lastly, the president reminded current students about the importance of humility and gratitude in their college experiences.

“You will be a better person for recognizing that the opportunities you enjoy at Centre are here largely because of the generosity of those who have preceded you,” he said.

Aside from her standout career as a scholar, athlete and community member while at Centre, she continued to make a difference after graduating, especially in Uganda, where she worked as a Global Health Fellow. Her cardiac screening and surgical program saved countless lives, and she received international acclaim after securing World Bank funding to establish a national registry of Ugandan children with heart disease.

John M. Stanton ’89 was another of Centre’s great scholars and a pillar of the Beta Theta Pi fraternity, an organization with which he is still very much involved. After receiving his law degree from Vanderbilt, he devoted his career to education and public policy law, culminating in a deputy chief of staff position with Congressman Geoff Davis. He currently serves as deputy chief of staff and district director for Congressman Brad Wenstrup.

Military service of the highest degree distinguishes Colonel Ronald D. Ray ’64, a retired U.S. Marine who served in Vietnam for two years, including during the 1968 Tet Offensive, for which he received two Silver Stars, a Bronze Star and a Purple Heart.

After pursuing his law degree, he devoted himself to public service, particularly the creation of the Kentucky Vietnam Veterans Memorial Fund, which paid for a monument commemorating the Commonwealth’s fallen soldiers. Currently, he is a managing partner at Ronald D. Ray Attorneys at Law.

Public service of an entirely different kind was the early work of J. Frank Yeager ’57, a secret service agent who was assigned to the protective detail of President Kennedy, whom he followed to Berlin and Ireland. He also took the fateful trip to Texas, following President Kennedy’s body back to Washington, where he was then assigned to protect President Lyndon Johnson.

After leaving the secret service in 1964, Yeager devoted his life to education, particularly school desegregation—a pursuit that resulted in threats from local Ku Klux Klan members. After receiving multiple state and national education awards, he recently retired as superintendent of Buncombe County Schools.

“Personally, it was special, not just because it was my first ceremony as AD at Centre, but as a graduate myself, to be on the stage with such distinguished people,” says Fields. “To have had the pleasure to watch my contemporaries Daniel Johnson and Cam Demmerle compete while I was a student here made the day that much richer.”

For Fields, the induction ceremony is an important campus tradition that reminds the Centre community not only of where it has been but also of the bright future it has ahead.

“Holding in high regard folks that highlight ‘the best of us’ is a critical part of our enterprise,” he says, “not only to remind us of the outcomes of our daily efforts in molding young men and women for the future but as a real life example to our current students of how the experience they are going through right now will impact them years beyond what they can imagine in the present.”

Robert Daniel Johnson ’97, a baseball star, holds the Centre record for career home runs; played on the SCAC First Team for three years; and made the NCAA All-South Region Second Team in 1997.

Joe Martin ’50 was a tennis standout with two undefeated tennis seasons, as well as a stint as team captain in 1950 and the honor of being a Kentucky Tennis Champion.

Jack Haddock ’43, an excellent football, basketball, track and baseball player, was given a posthumous induction. He was a multi-sport standout, as well as a letterman in all four sports and captain of the football team.