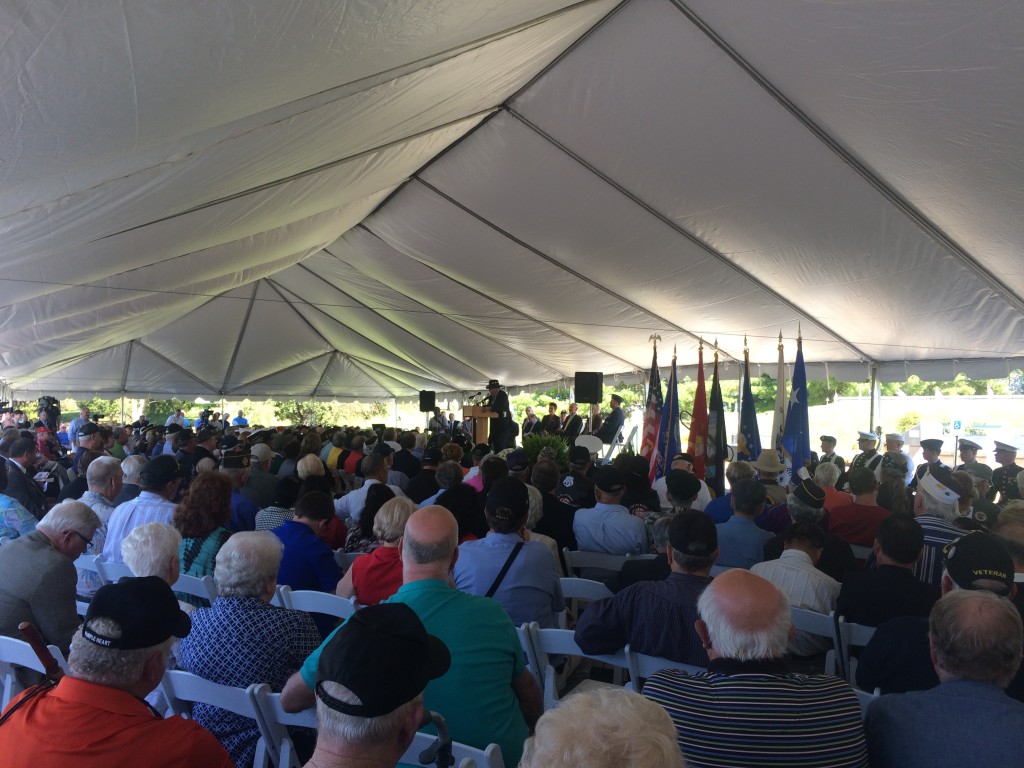 On September 25, 2014, I was privileged to hear journalist Joe Galloway speak at The Kentucky Vietnam Veterans Memorial in Frankfort, Kentucky where 500 veterans, family and supporters gathered to commemorate the 50th anniversary of the Vietnam War.

Joe was with General Hal Moore during the 34-day-campaign in the Ia Drang Valley in November 1965.  The Bardstown, Kentucky-born Moore commanded the 1st Battalion, 7th Cavalry Regiment.  He, Galloway and some 450 soldiers were dropped by helicopter into a hot landing zone only to be quickly surrounded by 2000 North Vietnamese soldiers.

The helicopter was the new mount many of us rode into battle. In fact, the war’s entire soundtrack could be the whoomp-whoomp sound of Huey helicopter blades cutting through the air.

Joe Galloway reported on Ia Drang, an early signal battle of the Vietnam War. Together Joe and Hal wrote the history of that battle described as a “love” story “told in our own words and by our own actions.”

The Prologue to their much heralded and lauded book, “We Were Soldiers Once…And Young,” gives an insight to the time and the men who served in Vietnam:

We were the children of the 1950s and we went where we were sent because we loved our country.  We were draftees, most of us, but we were proud of the opportunity to serve that country just as our fathers had served in World War II and our older brothers in Korea.  We were members of an elite, experimental combat division trained in the new art of airmobile warfare at the behest of President John F. Kennedy…Kennedy told the world that Americans would “pay any price, bear any burden, meet any hardship” in the defense of freedom.  We were the down payment on that costly contract, but the man who signed it was not there when we fulfilled his promise.  John F. Kennedy waited for us on a hill in Arlington National Cemetery, and in a time we came by the thousands to fill those slopes with our white marble markers and to ask on the murmur of the wind if that was truly the future he had envisioned for us. 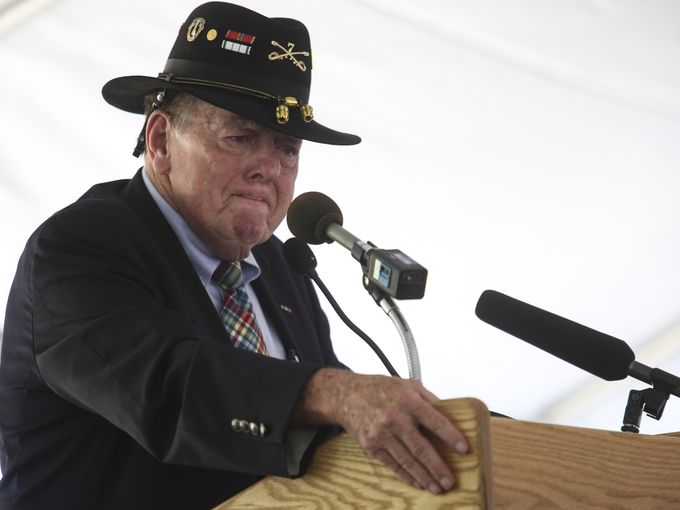 Moore and his 1st Cavalry Division’s heroism and courage were later depicted in the 2002 Mel Gibson film, “We Were Soldiers” and Joe Galloway is portrayed by Barry Pepper as the journalist at Ia Drang.  Mel, of course, portrays then Lt. Col. Hal Moore.

Since our chance meeting many years before at the Air Force Academy, Hal always referred to me as his “Marine friend.” I was delighted when he sent me a prepress copy of We Were Soldiers Once and Young and I read it eagerly.

Over the intervening years, there are many Vietnam memories and impressions I have sorted through since my service in 1967-68. While coming home is different for us all whether we write books, poems, become selfish or dedicated, sober or drugged and homeless, I came to terms with coming home from Vietnam by organizing and leading the Kentucky Vietnam Veterans Memorial Fund with a mission to build a memorial for all those Kentuckians who didn’t return from that misunderstood war. The memorial was finished twenty-six years ago and dedicated on November 11, 1988. 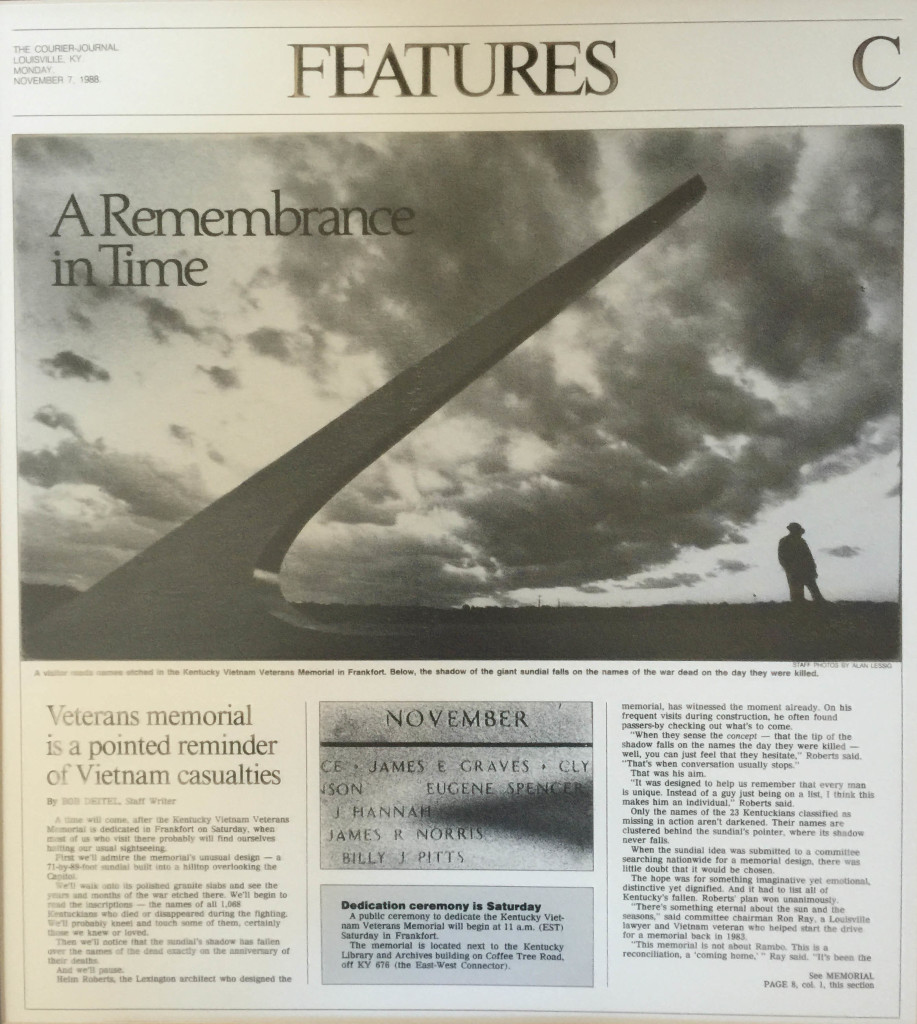 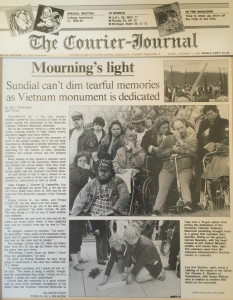 There were many people who added value to the process.  However, it was a great pleasure to work with Helm Roberts who considered the memorial to be his “legacy as an architect.” Online Helm is quoted telling an interviewer before his death in 2011 at the age of 80,“It’s what I will be remembered for.”

Helm was a Naval Aviator veteran. He designed the Memorial as a labor of love, and it is a masterpiece of mathematics as well as design.  The Memorial is in the form of a large sundial. The stainless steel gnomon casts its shadow upon a granite plaza. There are 1,103 names on the memorial, including 23 missing in action. Each name is engraved into the plaza, and placed so that the tip of the gnomon’s shadow touches his name on the anniversary of his death, thus giving each fallen veteran a personal Memorial Day. Helm fixed the location of each name mathematically by the date of casualty, the geographic location of the memorial, the height of the gnomon and the physics of solar movement. The stones were then cut to avoid dividing any individual name on the plaza so each man gets his day in the sun.

The Memorial is one of the larger granite memorials in the country, containing 327 cut stone panels weighing more than 215 tons from the Pyramid Blue quarry in Elberton, Georgia.  Because of this weight, it was by the grace of GOD and a naval aviator’s sound calculations that the sundial gnomon worked.  It is precisely accurate paying tribute to each fallen Kentucky Vietnam veteran on the actual date of his death by casting its shadow on his name.

On this bright sunny September day in 2014, on a Frankfort, Kentucky hill overlooking the steel gnomon, I stood in the back of a tent full of people listening to Joe Galloway and thinking about a time 50 years ago when I too was like Hal Moore – a young Marine full of love of country and zeal for our way of life and willing to serve in Vietnam only to return a year later, as my concerned mother commented, fundamentally “changed.”

With me this day is my stepson, Shelby Sears, a VMI graduate and Veteran of Operation Iraqi Freedom, now a man of 33 years, a husband with three small children, only 9 years old when he first saw the memorial. Tim Meshginpoosh came over from his Frankfort office also to attend the ceremonies. Tim is working with me, like Joe Galloway and Hal worked together to write my memoirs of the Vietnam War. Geoff Pinkerton came out also.  A few years ago, Geoff was my assistant who added a great deal to me and to my law practice. He was kind enough to leave his Frankfort office and join me back here at the memorial. Though in good company, I found myself missing my 92-year-old friend, General Hal Moore, who could not be with us.

Today, I am changed.  I am not the young man who left in 1967 for Vietnam.  The years have bought a shift in my perspective on war generally.  I would now say there is always a way to avoid conflict, but the young are easily incited to battle.  They are ignorant of war’s horrors as well as their place in the larger design made by those who never marched or ever will.  I am no longer angered by those who did not go to battle for their country.  Sadly their easy citizenship in this free country is cheapened by this omission. 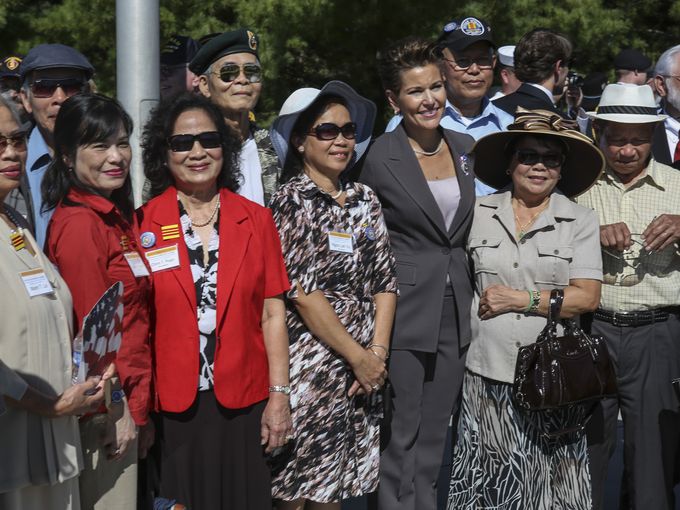 I will always remember the valiant South Vietnamese Marines I was honored to fight alongside.  They were selfless, brave and true.  Many suffered under the Communists war after the US left their country in 1975 at the fall of Saigon.  I recently located Pham Van Sat, a South Vietnamese Marine I fought alongside during 1967-68.  After a phone call reunion, he sent me a letter last month from his son’s home in New Jersey where he is living.  He wrote:

I was so happy – extremely happy to hear again your voice – after a long time – disconnected.  We had a lot of service together – in Marine Corps Schools – Quantico, Virginia (1964) – Oh! my god – 50 years ago!  We had “bitter-sweet” service in Vietnam – I was wounded 4 times.  I had surgery (operation) at my belly.  I remember you joked “Ho Chi Minh Trail.” I tell a little bit about my family.  I have 5 kids (too much!) – a lot of “night-shift!”, one daughter, 4 sons.  They live around here.  Two youngest – boys, still single – three others are married.  We have 4 granddaughters.  How about you?  I think the same!  I settled in USA (NJ) In 1991 – my brother-in-law sponsored my family to come – I’ve worked many jobs – CAN (nurse assistant) in nursing home, housekeeping in golf country club.  I’m retired now – my works in the past were hard, but at least I had money to send my sons to colleges.  My four sons were graduates from colleges.  My wife worked very hard too – labor job – menial work!  You know, Ray, in Vietnam, before 1975, my wife was a lawyer!!!!!  But a different language, different customs, different food, different weather – too cold!  Again, I’m so happy to keep connect with you – my only American friend in this country!

I remain proud of my service and proud of my stepson’s service for he surely followed me to the sound of the guns. For as long as Shelby’s lives he can respond “present” for evermore at the calling of the roll for all who answered the call to serve. His children will also know he did his duty when the country called upon him.

The “love story” Joe Galloway and Hal Moore speak of in their book is shared by both the US and South Vietnamese militaries.  It is the same for all those who serve and at its core is captured in the word General Lee described as ”sublime” that is simply doing one’s “duty.”

In my planning and hopes for the memorial as it began decades ago, I never foresaw the day when a contingent of Vietnamese would come to stand alongside us to honor those who fought for freedom in their country and the Kentucky dead who gave their last full measure of devotion for our noble cause together. Despite the reception US vets had returning from the war, it was nothing compared to the bitter “reeducation” camps for So Vietnam vets, like Sat, who fought against the communists.  Even after survivors relocated to other countries, they weren’t like us able to reengage their old lives.  They had to begin their displaced lives all over again in foreign land.

On May 1, 2014, Vietnamese-American Yung Nguyen established “The Vietnam War Tri An Foundation.” As the organization’s founder and first president, Yung is leading the effort in Kentucky to first recognize the duty, honor, commitment and courage of the American and the South Vietnamese servicemen, who fought together for freedom in Southeast Asia. Adding to the historical record, Tri An will also collect and present the stories of refugees who fled communist rule in Vietnam.

When Saigon fell in 1975, Yung was a young boy living in South Vietnam, his family having first been displaced from their North Vietnam home. In 1980, knowing the horrors of communism, Yung fled the communist takeover of South Vietnam by walking across Cambodia.  As a enemy of the state, Yung slipped through the lines of the communist Khmer Rouge to arrive in Thailand. HIs harrowing journey to freedom is one of thousands of stories of many other refugees, who also escaped communism abandoning their lives, relatives, possessions and lands in Vietnam.  Today Yung recognizes a growing number of South Vietnam and US leaders are now only accessible via their writings so now is the time to capture that history of those from both nations who served together and those refugees who fled Vietnam.  Last year at a Marine Corps Birthday celebration, Yung gave this wonderful and heartfelt thank you to all Vietnam Veterans.  Click here to watch: https://vimeo.com/110405500

The 50th anniversary commemoration of the Vietnam War here on this Frankfort hill gave me opportunity yet again to sort through, what may for me and many others, always remain the “fog of war.” Among my reflections of this day, besides doing my duty and the honor from serving my country, I have to say it was quite a thrill all these years later to have helped create this special place of remembrance for those who did not return home to Kentucky from the jungles of Vietnam. 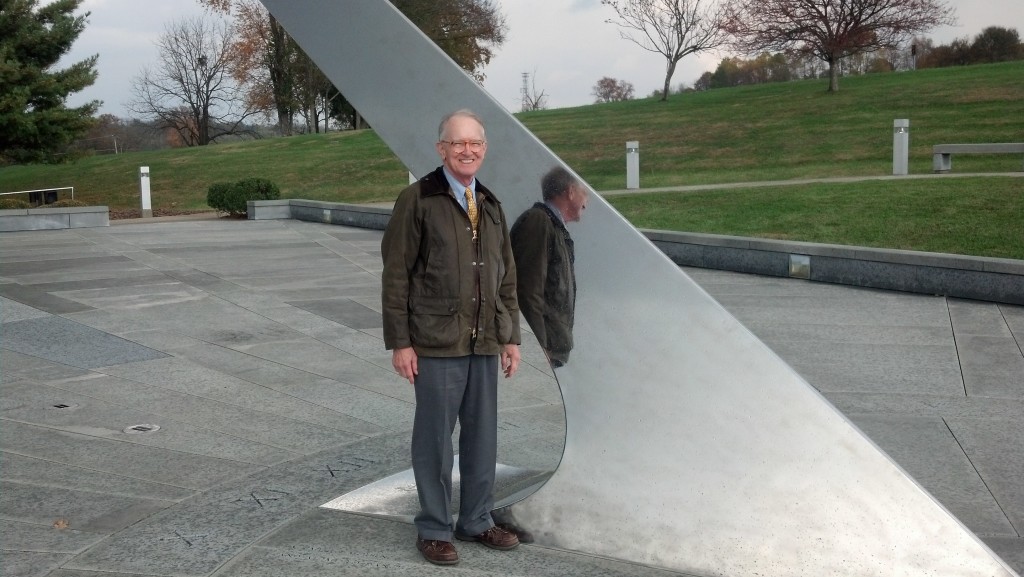 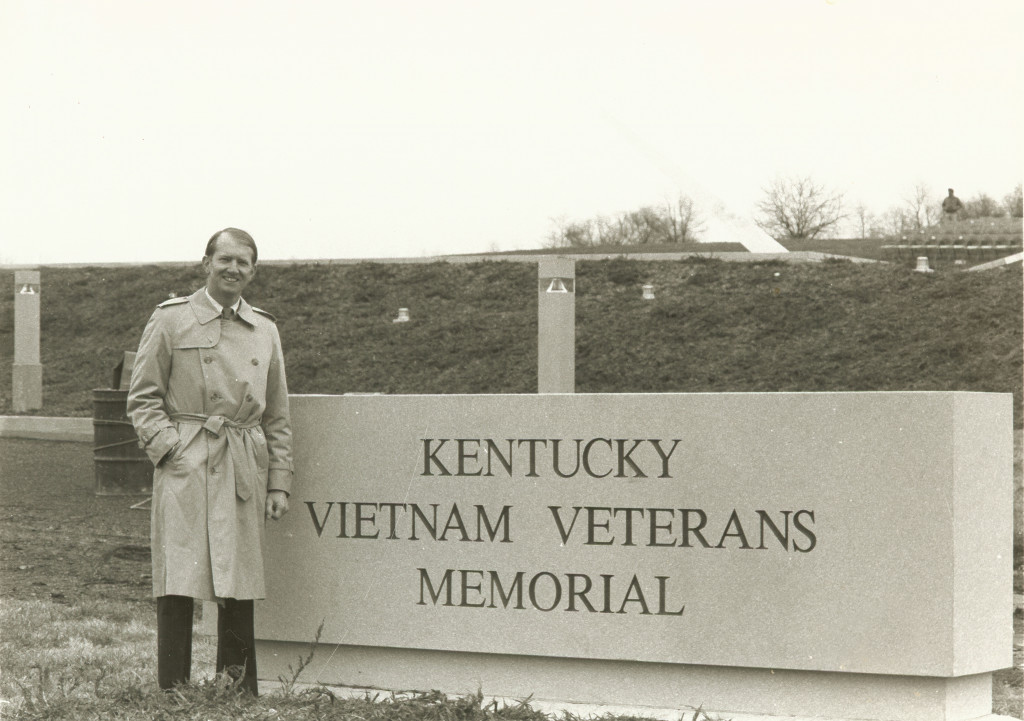